They can read the discussion at the following link, but first read what I will put here

Given the circumstances of the bear market and the inexperience of many investors, the leveraged and other things, I propose something to protect all users and also the INDIGO coins. Currently, the limit to request iAsset and be liquidated is 110% Liquidity can be maintained, but here are the changes that I suggest. 1-To request iAsset the minimum requirement must be 200% or 250%, the same as Djed recommends, but instead of 400% it would be 200-250% with indigo, increasing the liquidity of Ca…

“Before continuing, I’m not sure if it was due to the Google translator or what, but you misunderstood my proposal, and now I understand why there were attacks. Therefore, I had to use AI to explain it better to you. I clarify that I don’t have the intention of attacking the protocol, I just want to propose and discuss something. (I was secretly testing on Tesnet to prove my theory, but due to lack of liquidity and market trend change, I didn’t continue. The protocol justified that a bot was turned off, don’t think it is a vulnerability, but in case of a coordinated panic move, it may result in an unpayable CDP debt, leading the protocol to freeze funds or any other circumstance leading the limit to all users and the protocol. For example, look at the fall of the Cardano nodes, which fell by 50% in seconds and minutes, very similar to what happened with Solana (we will not discuss that here, experts let’s continue the discussion ).”

Therefore, before continuing, I ask that you look at the following images without reading anything I will write after them. If you believe your investment in a CDP will be liquidated between 110% and 200%, please review all images again. 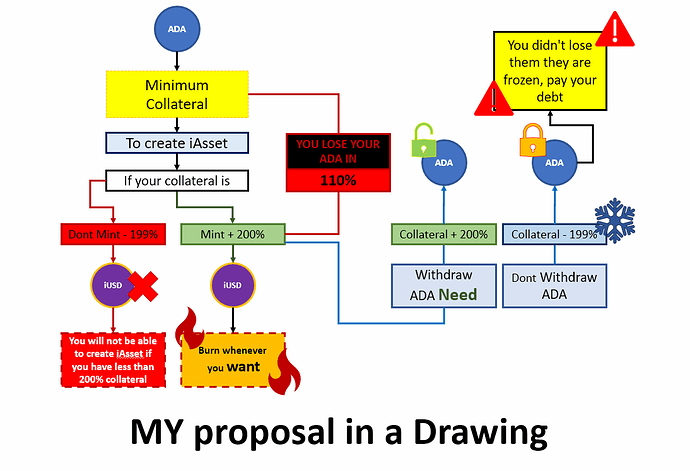 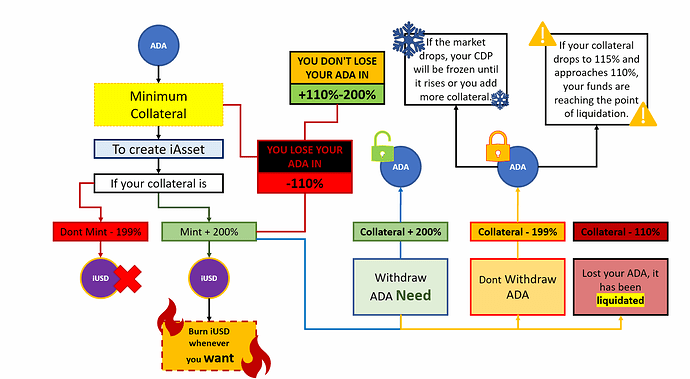 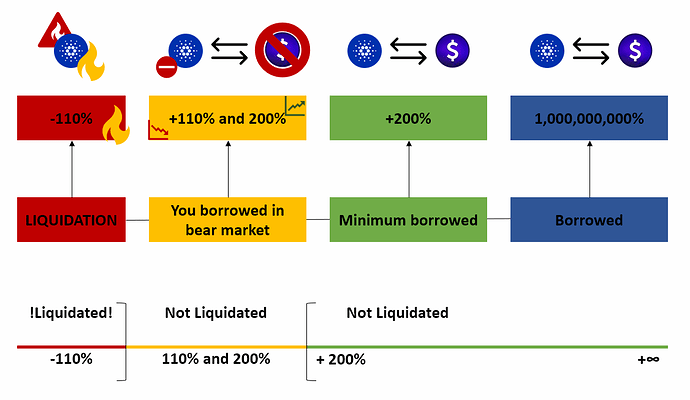 Now, if you have understood the images, I congratulate you. If you have not understood that the idea is to have a minimum to create a 200% collateral and that the liquidation is 110%, then I recommend reviewing the images again until you understand.

I will leave one final image taken from DJED to explain what I wanted to show in my proposal, but do not take into account the reserve currency (meaning there is no Shen or any other reserve token), this is to explain as best as possible if you did not understand with drawings. 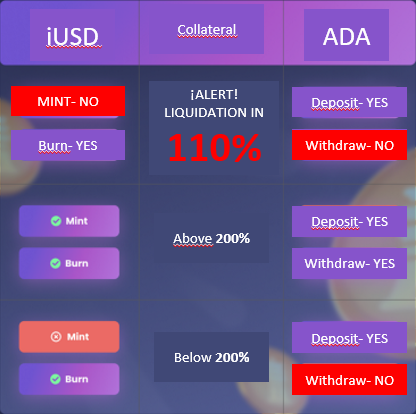 I deeply apologize if my proposal was misunderstood. I was not suggesting to raise the collateral along with the liquidation rate to 120%. I do not agree with that idea and do not approve it. My intention was simply to ensure that users cannot borrow in an irresponsible manner.

I wanted to propose something similar to DJED but with autonomy for each of us. If some are not in agreement with the loan being greater than 200% due to self-liquidation, I respect that decision and that of the community. For me, 200% is the most responsible, but if the community votes for 150%, that’s fine for me and I agree. However, it is important that the liquidation rate always be at 110%. In the last protocol change, I thought that the detail of increasing the minimum collateral to 120% was not well explained, and when I started to be interested in the proposal, it seemed like a bad move for the users of Indigo with such a mediocre proposal in governance. Voted ONLY SAYING “minimum collateral-120%” Be more responsible and also explain the details of the new limits.

This is my last participation in the forum and I am writing this to clarify what I am proposing. If you do not agree, simply vote against it and do not create problems about it. I am a user like all of you, just writing in this forum. I ask the developers to delete my previous proposals as they have caused conflicts and discomfort among us. Finally, I will not participate in this protocol anymore.

Thank you for taking the time to express your ideas. I’m still a bit confused as to what you are proposing but welcome further discussion.

If I got this right, he’s proposing that between 110-200% collateral ratio you should not be able to mint any iAsset. You can deposit or burn freely, but no minting below 200%. Liquidation would occur at 110% as it is happening now for iBTC or iETH, or 120% for iUSD.
Am I right, @juanCardano ?

If I got this right, he’s proposing that between 110-200% collateral ratio you should not be able to mint any iAsset. You can deposit or burn freely, but no minting below 200%. Liquidation would occur at 110% as it is happening now for iBTC or iETH, or 120% for iUSD.

Hello Borgues047, you are correct, that was my proposal for the community.

It’s already been decided that it’s detrimental to Indigo. That is why it is no longer a proposal that you should consider.

Thanks for your question.

Its not an attack its just discussion about the future of OUR protocol Indigo Protocol Proposal Temp Check Increasing ALL iAsset MCR to 200% is Still Nuts! - YouTube

Hi Manny, I’ve seen your video. I was waiting for your video, as I said in my last post, (I don’t know if they call it that) and that’s why it doesn’t have to be considered as a new proposal or something similar. As I said, all of the above is an explanation of my proposal (which did not have to be a definitive decision from what I say.) The above was written and for those who did not understand me. I was upset, because of 1 or 2 comments, but I’m not bothered by the proposal being rejected, out of 100 proposals that the whole community suddenly puts 1 will be implemented, I never expected mine to be implemented and I don’t think they will implement it, you know Well, that happens because of the developers and the DAO, so why would you be afraid if you know that it would be rejected by the same community, I want you to know that it doesn’t bother me that you comment or make your videos, on the contrary, continue with your videos, everyone We are all critical and we all think differently and I respect your opinion.

My proposal was more of a suggestion, as I told you I will be watching the evolution of the project and on the mainnet I am going with a little to see how 500 USD behaves for me is nothing, I would never wish anything bad to Indigo, quite the opposite I want Indigo ok, Cardano needs Indigo, and so do I, and I’m betting on Indigo too (CEO is nice guy).

It was just my precaution, I want you to know that after the moon I am very suspicious of synthetics and we have to be demanding if we are their consumers, and think about it as Indigo Customers and if we don’t like something we have to say so.

In all this time I never got upset if my proposal was rejected, my intention was to develop ideas with the community, from a concept or an idea, I wanted to see what other suggestions people had, what ideas they contributed and see what was born after Let’s all give an idea, I like and I’m passionate about proposing and making mistakes, and I look for solutions to those mistakes (THAT’S ME) I’m not bothered by my failure in my supposed attack or whatever you call it, it was a litmus test for me, and to be sure that indigo is a safe project, and it turns out that he convinced me that if it is, I don’t understand why they bothered, (You learn from mistakes). I will not be upset again if this proposal is rejected and that is the idea, that we all propose in indigo.

While I will be watching how it evolves, when I am more sure of Indigo, I will invest.

Finally, I apologize if I offended you, and for responding badly and if I was rude to you. I wish you success on your channel.