I propose that Indigo lower awards on stability pools to extend rewards amount and to lower the number of tokens released over time. I propose that the 40% of Indigo that is released through Stability Pools Rewards will be halved over time. This will help early investors to accumulate early and create scarcity of the coin over time. This will not be a quick fix for the price now but will help the long-term health of the protocol. I will have to run the numbers to get the exact dates and how this will be accomplished. Unless someone wants to do the work for me. I just want to reach out and see how people feel about this before I start crunching numbers. I do believe this is the best option in the long term. Below you will see the charts from the Indigo-paper.
Let us look over awards in stability pools first and then we can review token allocation of iAsset Liquidity Staking.
Thank you for any opinion against or for this proposal. 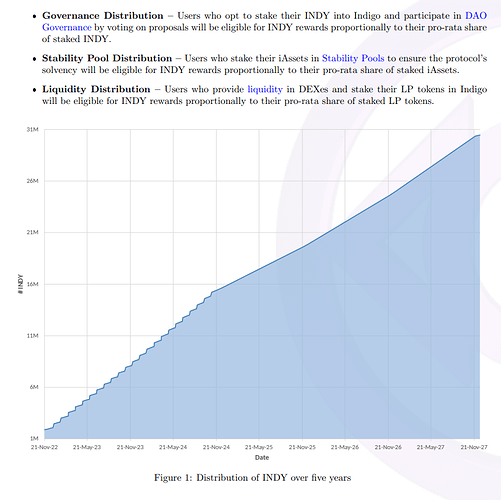 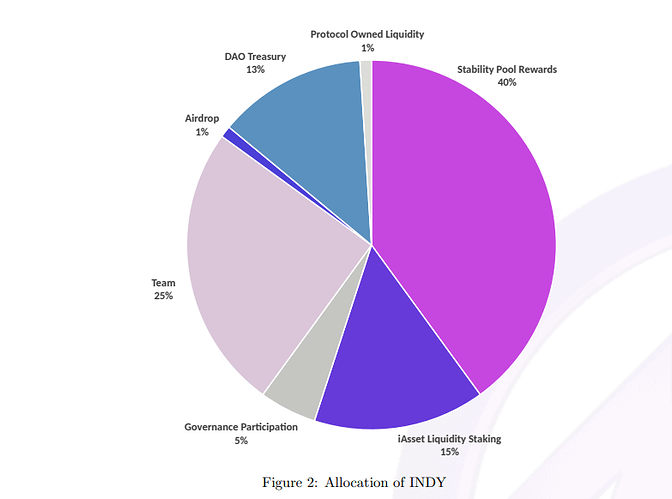 I think you’re on the right track here

Well thank you. However, I have not got anyone else to talk about it. lol.

So the charts above are the ones that are what we have currently. What I am worried about, if we burn through all the tokens to quickly then we won’t have as much incentive for people to join the protocol. We need to plan for 30 to 50 years. I will do the math.

Yes, there needs to be a focus on longer term growth. The 5 year vesting schedule is quite short.

There’s not so much discussion so far. It’s hard to convince people to purposefully reduce their rewards. We do need to do something though, and sooner rather than later. Perhaps we just push a proposal through governance and see what the DAO decides.

True. Let me do the math this week and I’ll submit something by the end of this week.
The issue though. If we run out of awards then people are less likely to put money in stability pools. I also feel that it will help the price in a long run if we treat it like a mining service. At this rate of release the value will keep going down because to many tokes are being released.

why the SP only and not halving in general? I’m just asking as this might cause the outflow of iAssets from the SP. Isn’t the SP important for the Indigo stability? I think there was a reason why SP rewards are distributed by this way. Maybe you’re right, I don’t know, I’m just pointing out and asking if there’s some particular reason targeting SP rewards only. Protocol is still so new - maybe it needs more time and adoption to evaluate such things.