While the protocol is protected under batching and closed source for now.

Would like to proposal minting rate limitation 2 week after each iAsset is launch.
eg only 20% increase in minted asset vs prior day calculate at daily and reward snapshot.
This can be used as protection against erroneous mint where someone manage to bypass collateral limit.

The initial minting of iAsset should also be subject to position limitation of 30% of the stability pool to ensure such account can be properly liquidated instead of having a single large minter.
At this point only 1 account will be limited in further minting and would help in long term stability

Any limits is out to protect and defend the protocol solvency and not limiting users.

Now consider if the account holder of 2m iUSD
And stability pool of 1.5m 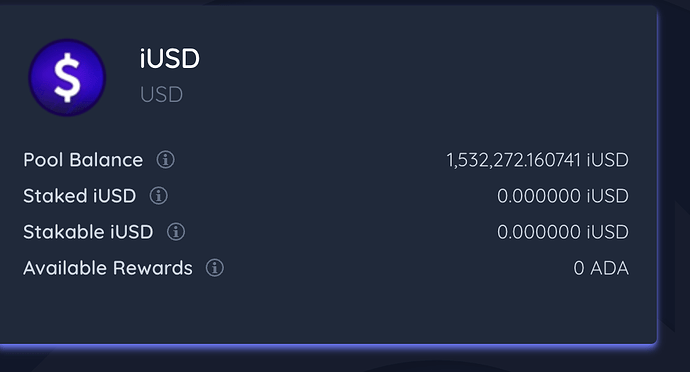 If he withdraw 10.2m ada and left with 8.8m and price hit liquidation at 0.25
This will result in a shortfall of 500k iUSD
Protocol enter into bad debt that at point of oracle if the account is liquidated at start of the drop. eg 0.25 cents.
1.5m stability pool at 0.25 will liquidate 6.6m leaving 2.2m ADA frozen + 500k remaining bad debt

if price continue to falls and end up with 0.125 cents oracle price
sending anymore iUSD into the stability pool would actually be negative value because this 500k will be use to liquidate 2.2m ada worth 275k only.

Given there is
1)Actual day that 50% drop happen in past 2 years.
2) Actual position that can result in bad debt currently (2m)
3) Actual lack of stability pool reserves to cover one single account bad debt.
4) actual incentive during extreme volatile period to withdraw from stability pool
5) actual incentive to front run oracle pricing by increase minting of iasset during volatile period

This is to defend indigo in its market operations even on days of extreme volatility."
protocol can survive for years but it only take a day to get totally destroyed.

now THIS one I support as is. This just makes sense. No real limits on the end user but protection of several (now well known) attack vectors on the protocol especially when extreme volatility is likely/reasonable to expect as a possibility.

This closes up major security risks without going against the spirit of the DAO or decentralization IMO.

Thanks
Main goal is to make the protocol as robust as possible and able to endure the worst day in past 4 years of bull/bear market and withstand high leverage traders liquidations. No one wants limits until they get impact directly and this is purely about risk management on protocol level.
some people might be upset but coded rules applies to everyone and we have the benefit of implementing it now rather than until its too big.
But I suppose more people need to understand possible scenario before passing proposal and hard coding it.
Obviously if a proposal properly explained and detailed by the team directly will also have much more convincing power.

This is an interesting idea but I don’t believe it’d be possible to implement in Cardano. Also to clarify, Indigo doesn’t use any batching.

is protected under batching and closed so

sorry wasn’t clear in my head
I meant protected under close sourced only. don’t even know why I typed “batching and” (must have been playing with too many dexes, was probably thinking something else but I can’t recall) but yea I get you.

I think this needs to be addressed. It is clearly a vulnerability and a possibility for a large ada holder to take advantage of. It is only a matter of time till someone sees this opportunity and acts on it. The protocol is young so these things are not an issue yet. I know limits are an issue for some, but I feel in light of the last year stable coin flaws, we need to build a stable coin protocol that is robust. Why not be strict in the beginning and reduce these measures when we feel stability and security is reached.?

This doesn’t make sense. There is no need for this and will only discourage new users. I’m against it.

doesn’t the protocol work in a way that you cannot withdraw collateral at 1:1 to iAsset in terms of USD value? I.e. in your example, if user withdraws 10.2m ADA - he or she can withdraw not more than the amount of iUSD was minted + Collateralisation buffer (i.e. 55% mark up) thus an withdrawal cannot liquidate the debt by itself. The remaining collateral becomes highly vulnerable to liquidation indeed but again - it will be liquidated once the market price reaches the actual cost of iAsset + 55% colleteralisation buffer - i.e. this buffer protects the stability pool and the balance of assets in favour to iAsset… so not sure what is the issue as the value of collateral CANNOT become less than iAsset

The buffer isn’t 55%
That would fall under MCR which is 110% currently for ibtc and ieth and going to be 120%
Whatever collateral you open the CDP 155/195.
You can actually instantly withdraw that collateral down to 110%

oh, then why min is 155%? I think the risks you raised can be solved by increasing MCR further to 30-40% - this will significantly mitigate the risks while not limiting the growth of TVL

Currently when opening a CDP position, Indigo recommended 155%,175%,195%. This is purely recommended but not enforced. After you open the CDP account you can proceed to mint up until you are at MCR (110%) with no delays, as iUSD become more distributed, the stability value of iUSD will come from ability to burn it to pay for debt at par $1 and mint it at $1. this is a soft peg. remember iusd being on the hands of non-debt holders in future and as this figure grow, so will the potential of misalignments if stability pool is insufficient to cover liquidations.(note it is impossible for stability pool to cover 100% of outstanding debt, this would otherwise imply no other use case for the synth except to deposit into stability pool)

Yes while indeed raising the MCR will increase the surface cost and helps in preventing such things.
This becomes a balance between raising MCR vs implementing a neutral Initial Margin Limit ( similar to what you believed in initially ie 155% fixed initial margin).
By implementing the neutral Initial Margin Ratio no one will have to get liquidated due to it as it will be applied to future actions on existing CDP position eg if you want to mint more iasset.

Your idea seeks the same as mine, that the project be healthy, my proposal was to have a minimum of 200% or 150% collateral, they took me for being toxic and harmful to the protocol. That’s why I left the group and I’m eliminating my debt little by little, the protocol may have 100% security, but having reserves doesn’t hurt the protocol.

I’m leaving, I wish you luck with your proposal. I will wait for Djed, and if you want stablecoins you can use $HAY from Binance which is similar to indigo, but the minimum collateral is a little more than 140%, the difference is that they charge you 2% per year to create stablecoins. 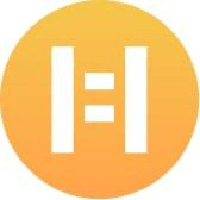 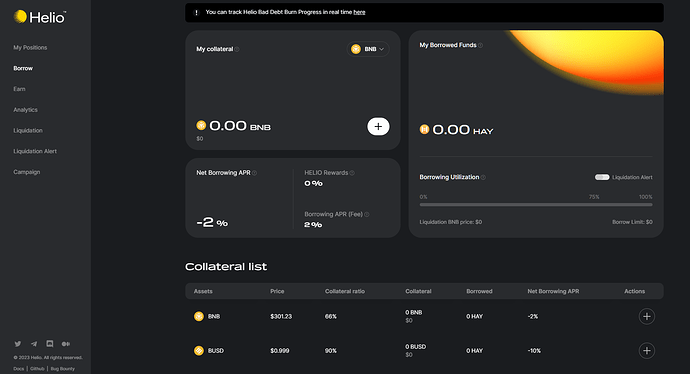 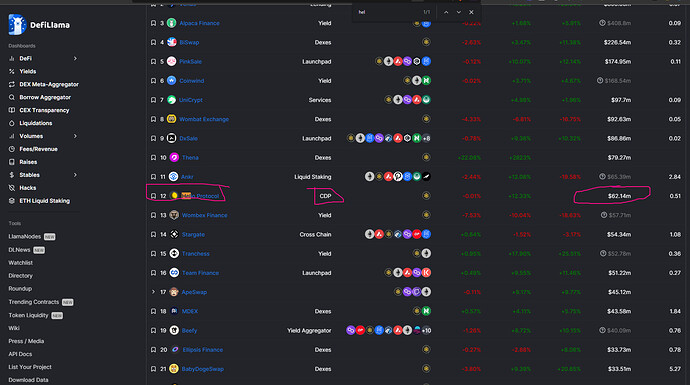 I found this stable coin similar to Indigo, and I want you to see that they remain with a collateral of more than 250%, here they complain because they are going to raise them to 120%, the bad thing about this USDJ coin is that it is in the network of TRX, I would never use it. Currently, their reserves are at 405%, for me that is very attractive. It gives me a lot of peace of mind, but again I don’t like TRX, market cap in that stablecoin 272 million USD. You really believe that with 200% collateral you are going to lose your investors, I believe that it is the opposite. They will see the risk. I am surprised that the collateral there has been almost 1000%.

in JST in TRX = INDIGO JAJAJA
Same as indigo, but reserves are more than 250%,
and the USDJ market CAP is 272M USD you complain a lot. If you see the reserves are at 405% and they reached almost 1000% 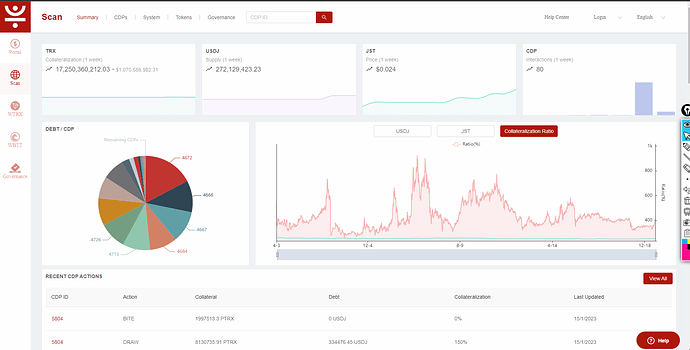 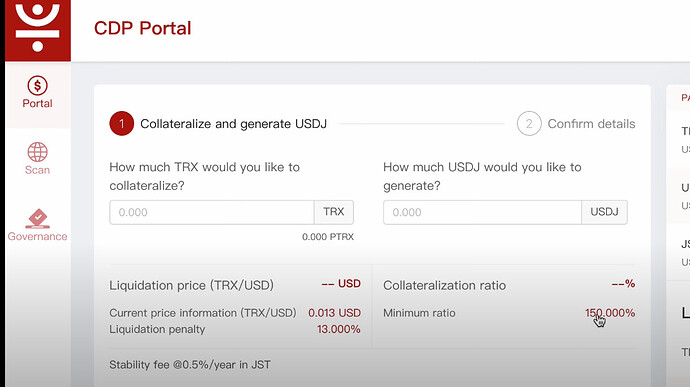 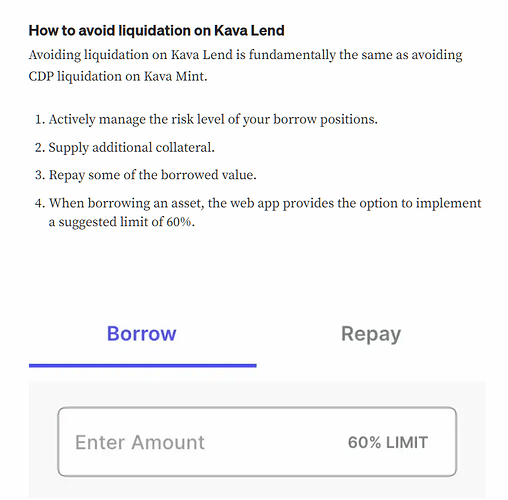 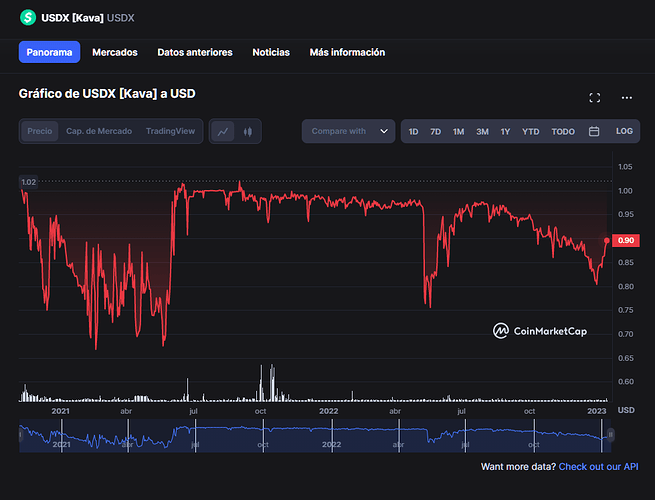 It is also a CDP, and the debt is bigger and the price of the stablecoin does not recover.