Proposal to adopt the creation of the Indigo Foundation

The team building the Indigo Protocol is committed to it existing as a fully decentralized financial system from the start, and part of that is the creation of a Foundation. The Indigo Foundation was formed on September 22, 2022 in the Cayman Islands.

Setting up a foundation entity is an increasingly common way for addressing the limitations of a DAO in that the foundation provides an extremely flexible framework that supports off-chain functions necessary for executing a DAO’s governance protocols. Simply put, most DAOs are not a legal entity or unincorporated association, but rather a non-jurisdictional and always fluctuating group of unknown and uncoordinated participants, represented by wallets, who have no role or rights other than to vote on on-chain proposals. A foundation-type entity is needed to implement the DAO’s passed governance proposals and otherwise engage with the off-chain world. The Indigo Foundation may engage with governmental authorities (for tax, regulatory or other purposes), contract with vendors, and educate the community about Indigo – all as directed by the DAO. 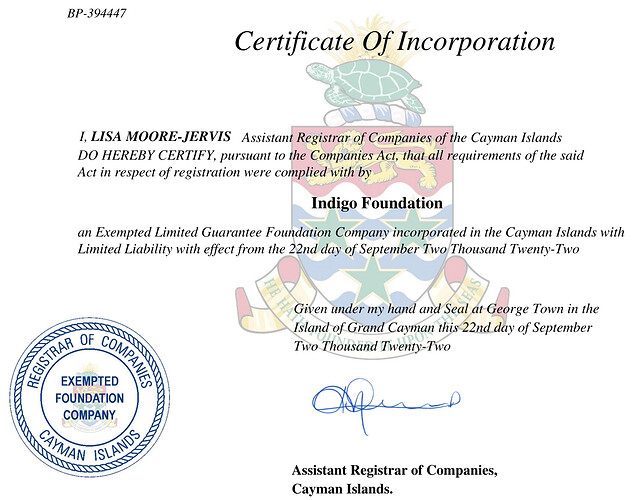 Why not a US or Swiss entity?

Foundations are often formed in non-US jurisdictions for not just favorable tax regimes but also to reflect the international or stateless scope of decentralized protocols. The laws of the Caymans are particularly well-developed for foundations and for Web3 businesses, and the Caymans has no corporate tax. Indigo was assisted in the formation of the Foundation by Carey Olsen, an international law firm that is one of the leading law firms in the Cayman Islands, and by Zedra Trust Company (Caymans) Ltd., a leading corporate management services company with offices throughout the world.

While it has recently become possible in Wyoming and a few other US states to form a DAO legal entity, those structures are new and untested, and the way that the DAO must be organized requires more involvement of participants than a true DAO. We followed the advice of legal counsel in selecting the Caymans. A Swiss foundation in Zug was also considered, but in the end the Caymans was preferred as less complex.

What will the Foundation do?

The Foundation does not have possession of or control the treasury; the Governance Smart Contract controls the treasury and can only dispense treasury tokens associated with a passed on-chain Proposal. DAO Proposals will need to fund the Foundation, and provide the Foundation with any tokens needed to make payments to third party vendors or the like. The team anticipates that, as the Protocol gains adoption, the DAO may authorize the Foundation to retain staff to oversee its operations, much as other leading DeFi protocols (including Uniswap and Balancer) have recently put to vote.

Upon formation, the Foundation has two directors. A local Caymans-based director (as required by Caymans laws) supplied by Zedra, and Eric Coley, the CEO of Indigo Laboratories, Inc. The team expects the DAO to authorize the recruitment of additional Board members to help oversee the Foundation’s operations.

Following are the documents related to the Indigo Foundation being proposed to be ratified. If these documents are approved by the community during the Temperature Check, it is later intended that these documents will be formally and verifiably adopted by the Indigo DAO on the Cardano blockchain after the mainnet launch of Indigo.

This is the second step to mainet, Lets Gooooo

One big step in the right direction

i was here when it all started… hi mom! congrats to the team

I do like the approach Indigo team. Quick question will the board members be voted into their role by the community?

I find the idea of ​​retaining employees and more active managers in the project interesting. Success for the team!

Create a foundation give a great corporate status to the DAO. Well done team!

Setting up such an entity shows the fact that how serious the team is about regulations. I have a strong feeling that Indigo is gonna be the most successful Synthetic protocol. They are doing everything right which other protocols ignored.

Yes- future Board members will be approved by the Indigo DAO after a vote to approve a certain candidate takes place. The current plan is to expand the Board by end of Q123

Congratulations to the Indigo team we are on the right track.

all of the work the team has put in coming to fruition! im impressed and i havent even seen the protocol yet

The US is a really bad place to do business nowadays. I’m glad you are moving far away from it.