Proposal: 3 iAssets of commodities for hedging in bear market

My name is Martin. I’m the SPO of ITZA, founder of Latin Stake Pools Youtube/Odysee channel for crypto educational content in Spanish and Cardano Ambassador.

I want to propose to the community the creation of three new iAssets based on commodities that have proven to be good hedges against crypto bear market. These are:

Reasoning:
iAVO🥑
From August 2021 to date, the price of NASDAQ:AVO has appreciated against BINANCE:ADAUSD by 621.48% 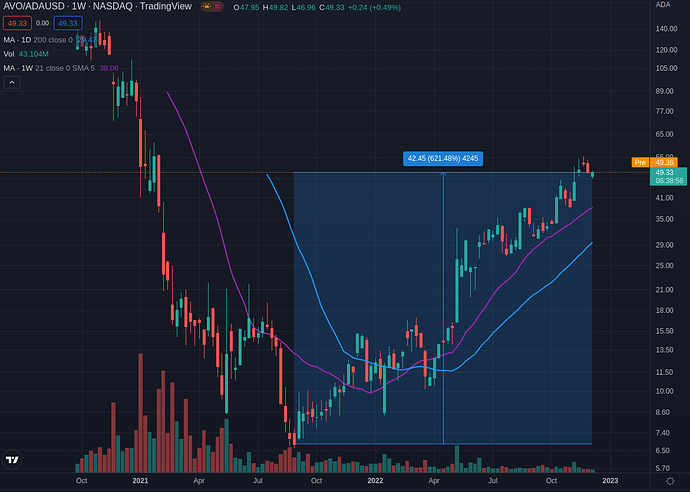 Conclusion:
I believe that adding these iAssets would greatly benefit the RealFi ecosystem of Cardano. A lot of individuals that can’t access the USA or European financial markets don’t have the opportunity to hedge their positions with commodities. RealFi is about providing real world applications to decentralized finance and Indigo Protocol is in a great position to provide financial opportunities to a great deal of people in the margins of traditional markets.

Let me know your thoughts of this proposal. Which other commodities have proven to be good hedges against crypto bear market? Is it feasible? @EC_ATX has expressed concerns regarding the CFTC on the discord server.

Just an outside observer commenting here.

FWIW, I like the idea. I would add Gold, Silver and certain other precious metals to this list as well. As you stated, this would be for markets outside of the U.S.

I think the question is how to do this in a credible manner? In the U.S. these would likely be classified as ETF’s. According to the U.S. Federal Reserve:

The Federal Reserve Board of Governors in Washington DC.

So if this is consistent, the assets have to be collateralized. Crypto is easier to do since it’s basically digitized asset. Since these are actual commodities, would Indigo have to have physical assets in hand, or be able to just go through a broker? If it’s through a broker, it’s more realistic. If it has to be on hand, then you’re talking about the storage of physical asset… which introduces a bunch of other financial and / or regulatory concerns.

Then the question is: Would you have to be approved by regulatory entities here like the SEC & Gary Gensler? Keep in mind that Gary Gensler has “knives out” for crypto projects.

Are there other options that aren’t as big of a production to roll out? Like going through a different nation state that is less stringent, and not allowing U.S. Customers to participate? If this is doable, then you have might run into the possibility of having to roll out KYC to ensure U.S. customers, and other potentially prohibited nation states aren’t involved in using these assets.

Excuse me for the wall of text. I’m just kind of thinking out loud about this.

Hi @PuckDaddy
Thanks for your response. These proposals of new iAssets are no different to iUSD or iBTC. These synthetic assets are over-collateralize with ADA. It would work the same way regardless of the asset you are imitating.
Regarding the ETF definition and application it would also apply to iBTC for example. My understanding is that the Indigo Foundation is incorporated in Cayman Islands, so the USA regulatory bodies wouldn’t have jurisdiction. One workaround is to put a warning saying that US citizens should not mint these iAssets, similar to what Pavia did.

I don’t know much about potential regulatory restraints but this idea here I really like. Definitely unique, you would get my vote for it.

Thanks Ron, I think the biggest challenge is finding a trustworthy oracle that can feed the prices of these commodities to Indigo protocol.

While i love the idea in creativity of it, I believe that the indigo protoco in terms of TVL and liqudity that has been provided to our dexes is still in its infancy. We are still much to early to be doing such “exotic” iassets.
In relation to an infant, we are only beginning to crawl. Once we find our legs and begin to walk(TVL across the board increasing) only then can we RUN and begin doing things like this proposal suggest.

Tokenized commodities appear to be one thing that set off securities regulators. Synthetix, one of the most mature synthetics platforms on ETH, does not offer them. They used to, but were removed.

This sounds awesome! There are so many commodities that I would love to hold a syth of. I agree with @DrOctaFunk that we are just in the infancy of this protocol and the moon is the limit in terms of what assets can be created. Let’s grow TVL and bring these new assets to our wallets, SP’s, and beyond.

@LatinStakePools Thank you so kindly for bringing this to our attention and prosing such an exciting case. I’d vote yes to the 3 iassets suggested above.

Thanks everyone for their support of this idea. I understand the protocol just launched and being cautious about regulation. I believe this is the true value of synthetic assets and RealFi, bringing market opportunities unavailable to the margins.

I’d say if it has a trackable price feed, conforms with the Indigo constitution and community vote it, then voila… We’ll have it